Spectral Engines develops new Smart Sensor platforms and combine those with novel IoT platforms in order to improve production efficiency and the quality of products in several manufacturing processes in the ProPAT project. The industrial partners of this project include many multi-national and national companies from the sectors of consumer goods, chemicals, pharmaceuticals, mining, nanomaterials, and polymers as well as numerous research institutes and universities from all over Europe. The budget of this project is totally 9 M€ for 4 year. The results will be validated in several manufacturing processes including milling of minerals, ceramics, metals, mixing and granulation of pharma products and polymerization of resins.

University of Leeds have examined the feasibility of Spectral Engines’ sensors to detect moisture content. In this case, solvent samples including ethanol, acetone and ethyl acetate containing water traces in the range of 1% up to 0.01% were tested successfully. This information could be used in the future to develop models for moisture analysis, such as those required by GlaxoSmithKline (GSK) for their process tableting pilot line, which is set as one of the goals for the ProPAT project. GSK is one of the world's largest pharmaceutical and health care company and also an industrial partner in the ProPAT consortium.

At the moment, most of the work done has been integrating the sensors in the experimental platform at the University. The initial goal is to compare the performance of the sensor against alternative analytical methods used for process monitoring. “Preliminary information obtained show that the sensors can be used to follow chemical reactions in which particular chemical species shows light interactions (absorbance or transmittance) within the sensor wavelength range. For instance, we have used the sensors combined with a chemometric algorithm to follow the concentration changes during the esterification reaction between ethanol and acetic acid to generate ethyl acetate and water, a model case which is currently study as a preliminary step for the ProPAT project” says Dr. Claudio Avila from University of Leeds. Prediction curves obtained are shown in Figure 1. 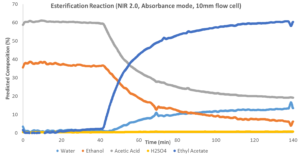 Figure 1: Compositional changes predicted from the sensor data combined with a chemometric algorithm for the esterification of ethanol and acetic acid to generate water and ethyl acetate (reaction performed in batch mode).

“However, there are several variables that could affect this, for instance the physical interface between the sensors and the chemical process, e.g. flow cell or immersion probe used, fibre optic cables, and light source selected, and the data processing algorithms used to obtain relevant information. Once the effect of these variables is isolated we will be able to evaluate the advantages and disadvantages of the sensors in a continuous process.” Dr. Avila continues.

Spectral Engines’ CTO, Uula Kantojarvi, sees a great impact from this project also for Spectral Engines’ future technology development. “We like to do collaboration with research organization in many ways. ProPAT project is an excellent example about the project where we have really good collaboration with research organization and we get valuable information about possible applications for our sensor technologies.”

The University of Leeds, established in 1904, is one of the largest higher education institutions in the UK. They are a world top 100 university and are renowned globally for the quality of our teaching and research. The School of Chemical and Process Engineering (SCAPE) is a distinctive, multidisciplinary combination of materials and process engineering, undertaking research within the energy and transport, particle science and engineering, health and personal care, and speciality-materials sectors. Much of their research is challenge driven and impacts on real-world issues, to the benefit of industry and the general public.

*ProPAT is a European funded project under SPIRE program.

Spectral Engines identified as one of the key players in the Food Scanner market
14.04.2020

Important update related to the COVID-19 and ways of working at Spectral Engines
18.03.2020