Artificial intelligence is said to change the world like electricity did in the past. AI is already present in daily activities and devices such as voice and facial recognition and customer service chatbots, we are just beginning to see the possibilities of AI in education as well. Many countries, including Finland, has set a goal to be a forerunner in developing and applying future Artificial Intelligence applications and businesses. Reaktor and the University of Helsinki set a goal to educate 1% of the Finnish population by the end of this year by offering free online course “Elements of Artificial Intelligence”. Another example is the FinEduAI project that introduces artificial intelligence as an integral part of upper secondary school studies.

Spectral Engines joined the FinEduAI project as one industrial partner. Other partners are Finnish National Defence University, department of military technology, Spectral Engines Oy, Firstbeat Technologies Oy, Mobie Oy, University of Jyväskylä and University of Eastern Finland. The aim of the project is to make significant co-operation with Finnish universities to develop new ways of learning and using artificial intelligence. Spectral Engines’ NIRONE Sensors will be used to measure the composition and concentration of substances and collecting data to build AI algorithm for material sensing.

The second network meeting of the FinEduAI project was held in the of central Finland on Wednesday, 3rd of October. The meeting brought together three coordinators of the artificial intelligence project, AI developers, Muurame high school students and Spectral Engines as an industrial partner. The purpose of the meeting was to learn the use of the NIRONE Sensor by Spectral Engines’ AI Expert Pekka Röyttä's guidance. The students learnt the use of the NIRONE Sensor and SensorControl Software to collect data and they also studied how to analyze different kind of materials as a part of their chemistry lessons. After the data collection, high school students would get a model from our AI expert Pekka Röyttä that they would quite easily start coding by using the Python programming language. 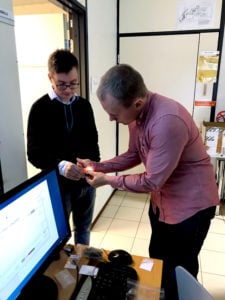 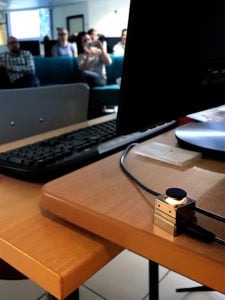 Current AI systems are most useful as an expert of a very narrow field. Our algorithm developers seek to make spectral analysis of material composition available for the mass production by using AI system to perform the analysis quickly and efficiently. The principle is very simple. We have developed a sensor that measures the near infra-red spectrum from a material and then sends it over to a cloud service that runs a deep learning model which can calculate the composition of the material the scanner is measuring.

Spectral Engines identified as one of the key players in the Food Scanner market
14.04.2020