There are different types of spectroscopy that are essentially based on the same steps. To identify the material or material composition, the sensor needs to learn which spectrum belongs to which material. This process is called calibration and describes a software program that relates reference values to measured spectra.

Infrared spectrometers are already in widespread use, thanks to their great accuracy and flexibility compared to chemical detectors. The new generation of Spectral Engines® spectrometers meet many industrial applications require highly miniaturized and robust NIR devices and provide small, robust, inexpensive and intelligent devices to bring measurements to field use.

Near infrared spectroscopy is a physical method for the non-destructive determination of mostly organic molecular compounds. NIR spectroscopy works with light between approx. 800 and 2,500 nanometers wavelength and thus lies between the visible spectral range (VIS) and the mid-infrared (IR).
A major benefit of NIR spectroscopy is that it doesn’t need any sample preparation. Silicon-based sensors (CCD, CMOS) are often used for spectroscopy applications but, despite a high signal-to-noise ratio, their sensitivity is not sufficient for many applications. Though sensitivity of InGaAs detectors are not that good compared to silicon based detectors, the selectivity and sensitivity are typically better at true NIR range beyond of 1000 nm.

There are several methods to miniaturize NIR spectrometers and integrate them into existing devices or products. Spectral Engines technology is based on a tunable Fabry-Perot interferometer. Interference filters are traditional ways to make fixed-wavelength optical filters and our Fabry-Perot technology is based on same principle. But instead of having only one single wavelength Spectral Engines optical filter is a fully programmable and robust sensor which can be operated such that it measures only a few wavelengths, or such that it scans across the whole wavelength region. Our spectral sensors utilise only a single detector instead of an array detector. This makes the sensors affordable. The detector and optical aperture are large and the filter transmission is typically 80-90%. All these mean that Spectral Engines NIR sensors are very powerful spectrometers in the true NIR range, offering high sensitivity.

As noted above, the NIRONE Sensor uses a single point detector instead of a linear array detector, which makes it an affordable solution. The combination of a single detector and Fabry-Perot Interferometer technology allow use of bigger detector area than in linear arrays where the light restricted by a slit. This makes NIRONE Sensor S/N ratio significantly better than older technologies. 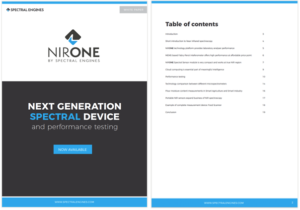