How counterfeit medication is infesting the drug market

We are surrounded by all things fake these days. The top 5 of counterfeit goods include medicine, electronics, clothing, multimedia products and food. A while ago I witnessed with my own eyes a forged Gibson-guitar and a bunch of fake Ray-Ban sunglasses. Even though the fact that these products are fake is extremely annoying and they cost large sums of money to a lot of people, the silver lining of a fake Gibson is that no-one dies by playing it. The problem with fake products starts to become a huge, dangerous issue when we start to deal with products that are not only fake, but potentially lethal.

Counterfeiting is a problem worth $600 billion annually. It is estimated that drugs alone make up a portion worth $70-200 billion. Drug forgeries are a massive problem worldwide, but an even bigger problem in developing countries, particularly in many African countries.

For example, malaria is a disease that can be prevented and even cured with proper medication - unfortunately, depending on the country, 33-64% of malaria medication is fake. The situation is the worst in Nigeria, where in some areas even 70% of all medication is forged. Annually almost 700 000 people are killed because of counterfeit malaria and tuberculosis medication.

The World Customs Organization, WCO, published a report in January 2017, where they reported that a new record of illicit medicine seizures was done in Africa. Operation ACIM (Action against Counterfeit and Illicit Medicines) was carried out in 16 African countries over a ten-day period, and during this time 113 million illicit and potentially dangerous medicines were seized. Imagine what heights the record might have gotten to, if they would have had even more effective material sensing methods on hand.

Just look at some statistics, and you'll get an idea of how big of a problem we're dealing with: 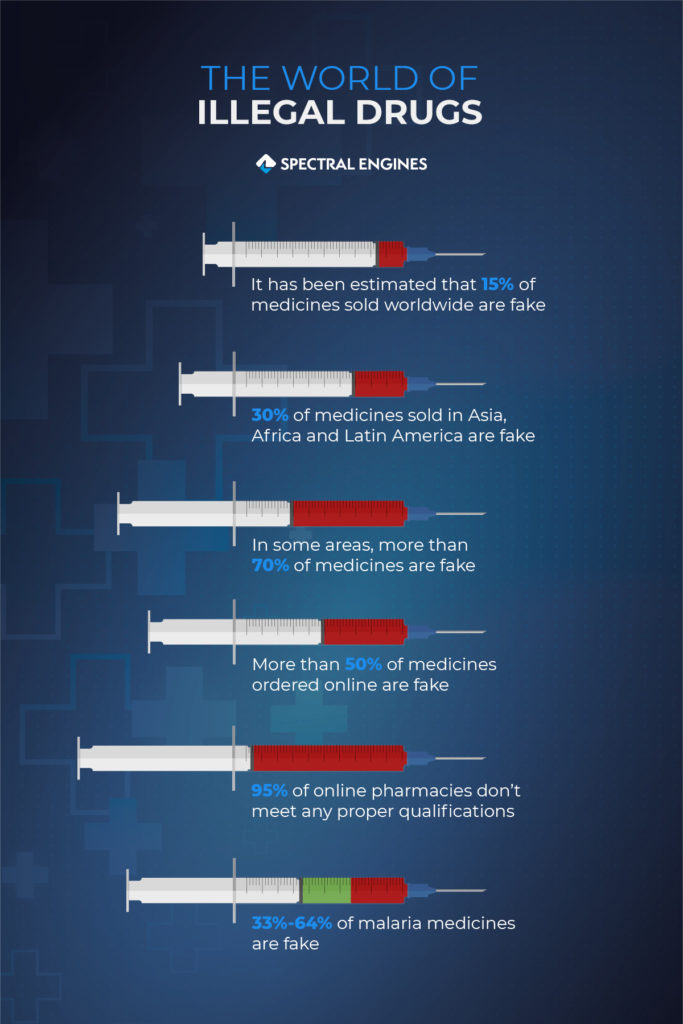 Counterfeit medicines can be found anywhere from street vendors to online pharmacies, and they are very hard to track and identify without proper tools. Luckily for everyone, drug manufacturers and distributors are finally increasing their investments in countermeasures, such as authentication technologies, and try to minimize the impact of counterfeit drugs. A lot of work still needs to be done - and I'm happy to say that we at Spectral Engines can offer an effective and relatively cheap way to solve this problem - our NIRONETM Scanner.

Finding a fast and cost-efficient solution

Spectroscopic technologies are quite widely used for material analysis in central laboratories. Thanks to their unique fingerprints of different chemical compounds, it is easy to identify pharmaceutical products but also inspect if they are genuine or fake products. It has been estimated that 60% of counterfeit medicines don't include any active ingredients, which makes it easier to screen a large number of tablets and find fake tablets quickly.

The majority of existing portable spectrometers are based on Raman spectroscopy. Until now, one of the biggest problems of material sensing applications has been their high cost. These devices developed especially for identifying drug forgeries can cost tens of thousands of dollars and are too expensive to purchase even for authorities with greater resources, let alone for people in charge of identifying forgeries in developing countries.

In my opinion (and many field studies back me up on this, as NIR-spectroscopy is widely used in the research of legal medicines), the Spectral Engines' NIRONETM Scanner is the perfect solution for detecting fake medication. Thanks to its unique capabilities such as machine learning, it's a perfect tool for officials with less resources and developing countries as well. With the completely new development process we've been able to productize, it is possible to create a dedicated scanner solution in just a few months, for example for detecting malaria medication. In other words, one doesn't need to develop extensive chemical libraries if the measurement application can be defined well enough. Our deep learning algorithms ensure that new types of forged drugs can be detected once the scanner users find them on the field, making the medication reference library in the cloud ever-expanding.

We've also been researching how our solutions would work in real life scenarios. Our Business Development Consultant visited Namibia a while ago and got acquainted with the counterfeit problem the country has been facing. On top of finding fake medicine, our technology can be used in material sensing applications that identify forged food, clothing, cigarettes, cosmetics, alcohol and illicit drugs. I'd call that a pretty vast selection of important things, don't you think?

Would you like to know more about the use of spectrometers in the field of medication? Earlier this year we interviewed Niklas Sandler, a professor of Åbo Akademi University who’s been researching printable pharmaceuticals for years. Professor Sandler gave his insights on our technologies and material sensors in his research for predicting drug content in inkjet printed orodispersible formulations.

Spectral Engines’ NIRONE Scanner: A tool for anti-counterfeiting - a view from an expert
20.11.2019