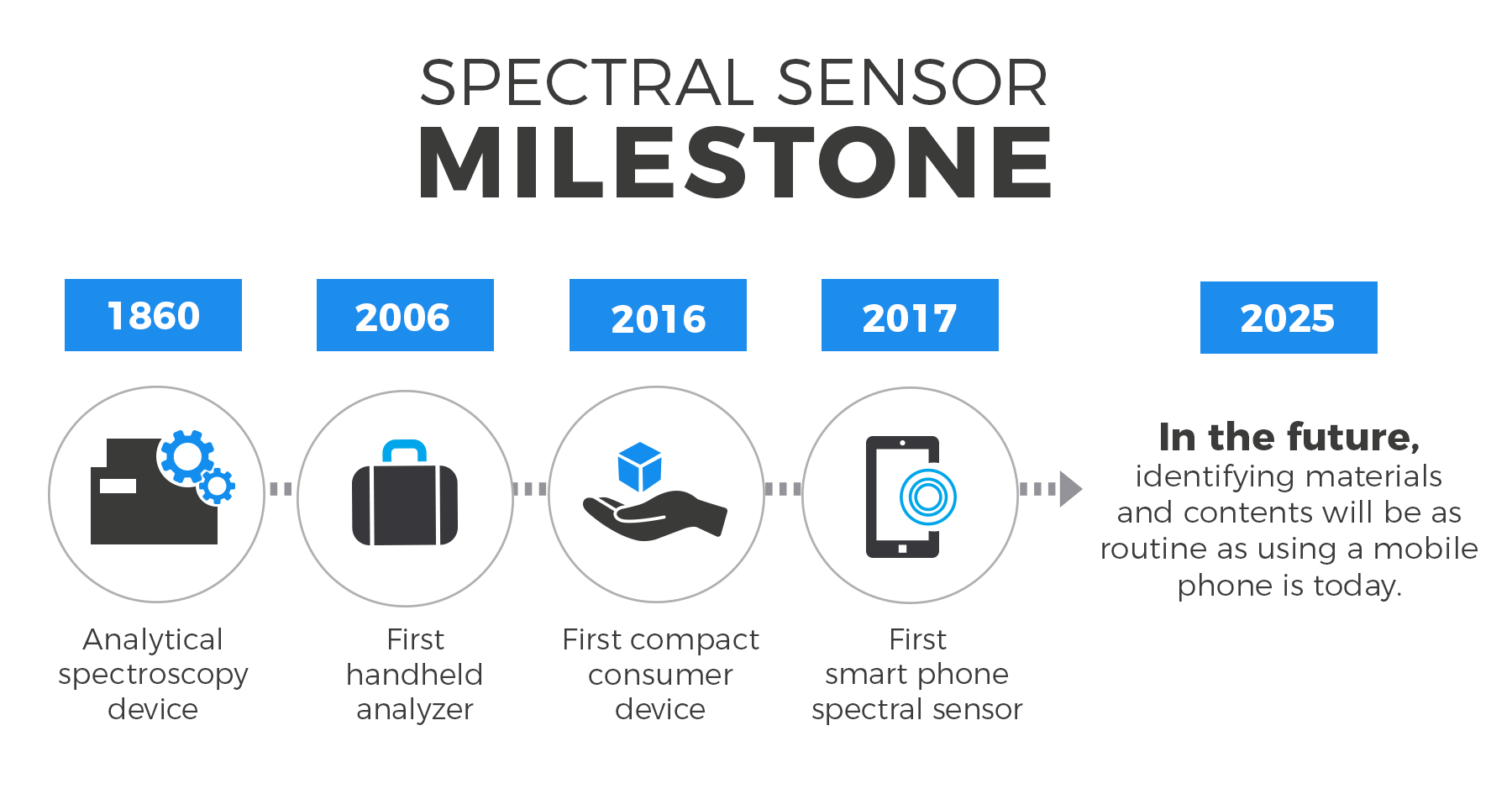 This fall, we have been writing the history of our young company. You might wonder why we wanted to write the story of a company founded in 2014, when the major steps in its development are yet to come. But that’s exactly why we wanted to do it. We aim to play a significant role in building the future, which is why we wanted to approach the task of writing our history from the perspective of the future:

In daily life in the future, we can instantly find out what the food we consume contains, what materials our clothes are actually made from, and whether our medicines genuinely live up to their promises. These things, and many more, will be enabled by intelligent spectral sensors that recognize and analyze the “fingerprints” of materials. In fact, this vision of the future is already part of our reality today. The sensor-driven revolution has already started in many areas, including the monitoring of material flows in industry as well as agricultural applications.

You can read our brief history here.

The story of our company mirrors the trends of our industry. Our entire industry is characterized by a rapid rate of development, with no obstacles in sight. If anything, the opposite is true. Sensors are already down to a fraction of the size of their predecessors. The development cycle of new sensors and applications is no longer measured in years, but months, and this trend is set to accelerate in the future.

The technology that will transform our day-to-day lives is based on spectroscopy, in other words identifying the wavelengths of light reflected or transmitted by the material being analyzed. Spectroscopy has been routinely used in laboratories for several decades, but we believe it is now set to rapidly become commonplace in our daily lives as well. A spectral sensor identifies the wavelengths of the material being examined and the software connected to the device translates this data to make it understandable to users who aren’t familiar with spectrometry.

In the future, identifying materials will be as routine as using a mobile phone is today. While this technology is only in the early stages of its path to mass market adoption, its trajectory will probably be very similar to how mobile phones went from being professional tools to the camera phones in everyone’s pocket. The parallels between the key milestones of camera technology and spectroscopy are something that we made note of a few years ago, when Spectral Engines was just getting started.

We observed that spectroscopy has reached the same stages of development as camera technology, just some 15–30 years behind. Mobile phones with cameras passed the one billion unit mark in 2010! 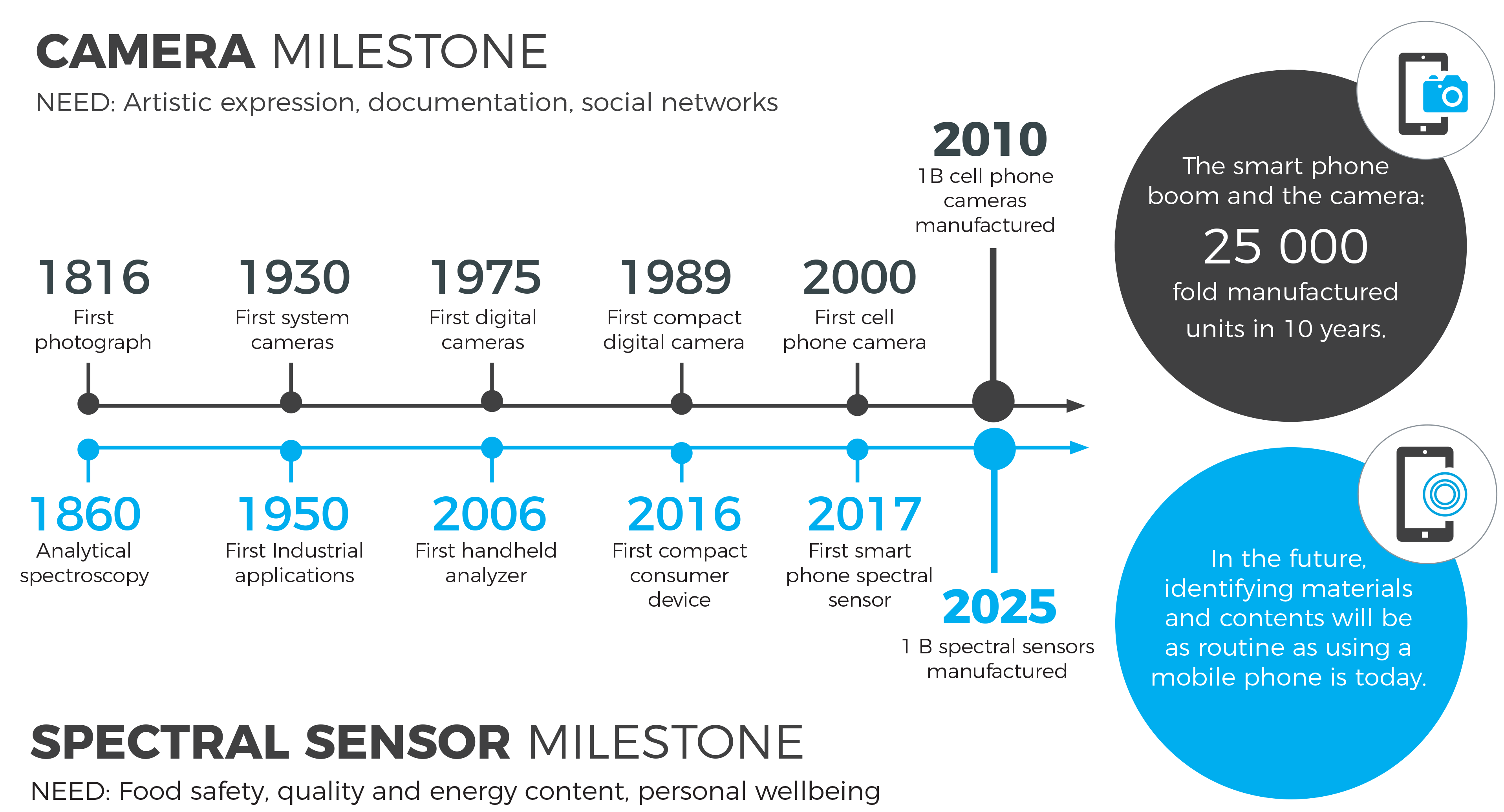 The sensors of the future are already here

In August, Tomi Väänänen wrote a blog entry describing how spectrometry has gone from expensive professional analysis equipment to much smaller and more affordable applications, including consumer applications. Spectral Engines’ sensors today are ten times smaller than traditional sensors while delivering at least ten times the performance. They are also much less expensive than traditional sensors. Where a normal laboratory analysis device costs tens of thousands of dollars, our spectral sensors are priced at only a few hundred. But all of this is just the beginning.

In the future, sensor connectivity and IoT will increase the potential uses, reduce development costs and significantly shorten development times. A thousand-fold increase in performance combined with easy deployment and cost-efficient maintenance will enable many new applications for sensors that are suitable for identifying materials. These developments will see sensors become commonplace in sectors such as manufacturing and agriculture.

In agriculture, the new and affordable high-performance sensors will deliver added value in food production, processing and consumption. Efficient sensors can be used in food production (on fields), food processing (food production facilities), logistics (food quality and freshness) and, ultimately, to measure nutritional content (consumers). This means that future sensor technology will cover the entire value chain in food production, from field to fork. It has been suggested that, in five years, the number of IoT devices can increase by as much as 75 million units in agriculture alone.

The development of sensor technology will significantly change our perception of the world around us. You can only imagine the wide range of industries that will be transformed by this revolution. Besides agriculture, some good examples include industrial quality control, smart homes and portable analysis equipment.

Why is this the right time to get started?

So, why is the subject of this blog entry so important right now? The future revolutions I have described can’t be achieved with existing technology. They require even smaller and more efficient solutions. To wrap up, let’s return to the earlier comparison between the development of camera technology and material analysis equipment.

There are many famous instances of technological advances leaving slow-moving giants in the dust. The trajectory of Kodak cameras is one example. As the global market leader, Kodak expected the era of traditional film cameras to last forever. In the development of material analysis devices, the same fate awaits those who are stuck in a rut, unwilling to get out of their comfort zone. The question is, where do you see yourself? As the driver of the high-speed train of the future or the passenger waiting at the station? Stay tuned to our blog and webinars to ensure that you’re in the driver’s seat as technological development picks up speed!