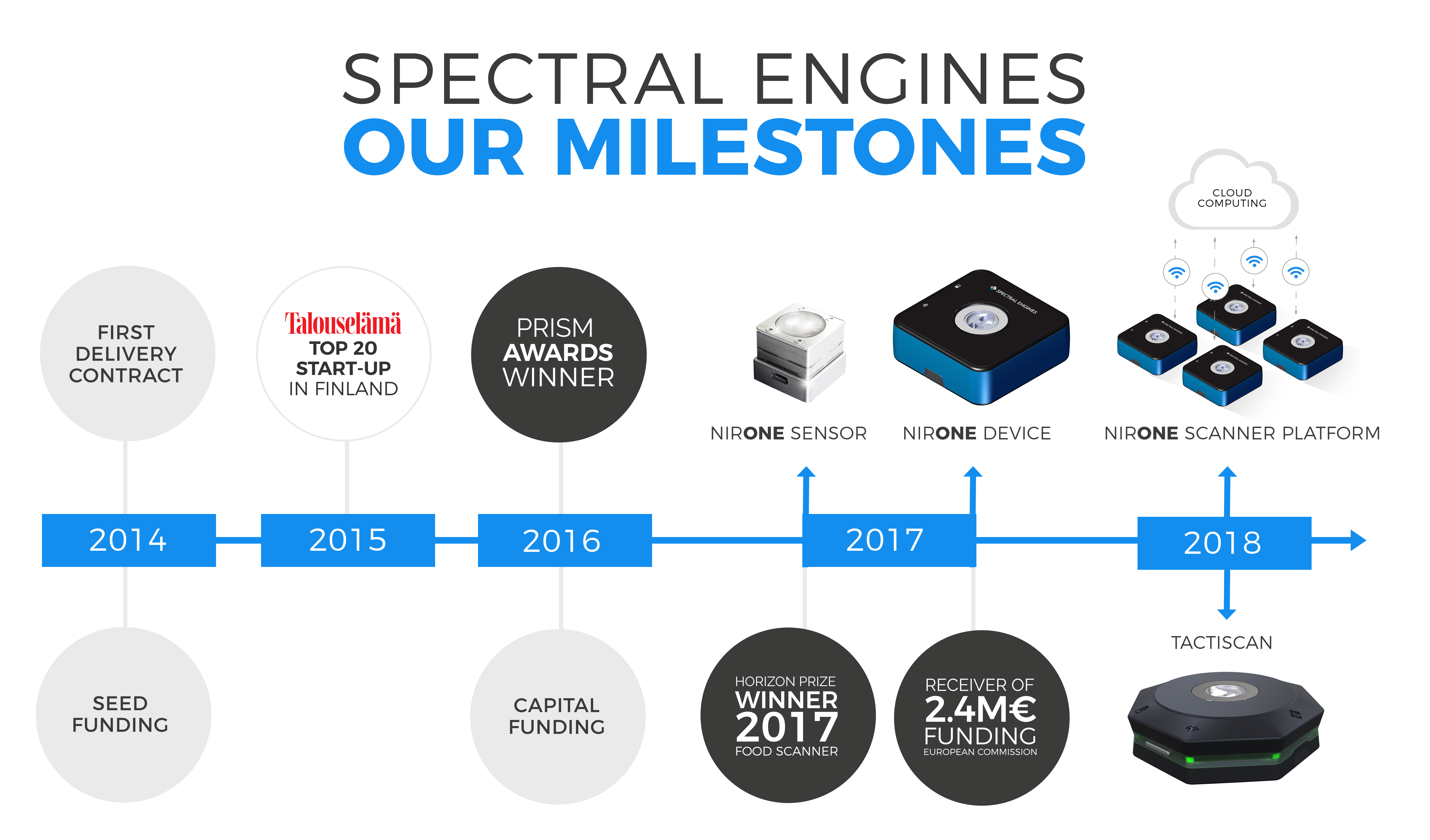 A brief history of Spectral Engines

Spectral Engines makes the technology of the future, right here and now

In the everyday life of the future, we can find out in just a matter of seconds what the food we consume consists of, what materials our clothes are actually made of and whether our pharmaceuticals will live up to their promises. This, along with many other things, will be enabled by intelligent spectral sensors, designed to recognize and analyze the “fingerprints” of materials. This vision of the future is in fact a reality even now, as the revolution of the sensors has already begun with the identification of explosives and drugs.

The groundbreaking technology revolutionizing the world of everyday lives is based on identifying the wavelengths of light reflected or transmitted by the material being analyzed. A spectral sensor identifies the wavelengths of the material being examined, and the software connected to the device translates this data, so the users don’t necessarily have to be familiar with spectroscopy. In the nearby future, identifying materials will be as routine as using a mobile phone is today. While the journey of this technology to mass market adoption has only just started, its trajectory will probably be very similar to how mobile phones went from being professional tools to the camera phones in everyone’s pocket.

Spectral Engines is replacing large professional analysis equipment in laboratories with much smaller and more affordable pocket-sized devices, partnering with international manufacturers. The traditional spectrometer has already been replaced by combining a small optical infra-red filter with a single detector. Thus, an intelligent spectral sensor has been created, and the Finnish technological world-class know-how has played a crucial part in this development. The future really is being made in Finland, here and now!

International success is already well on its way

All of these partly futuristic visions could be branded as just marketing talk, if there wouldn’t be any real proof behind all of it. Spectral Engines has created the world’s smallest spectral sensing solution, that has reaped international success. In the spring of 2017 Spectral Engines was awarded with the main prize in EU’s Food Scanner competition of recognizing ingredients and materials used in the food industry.

Spectral Engines Food Scanner concept combines the world’s smallest true NIR spectral sensing module, advanced algorithms, cloud-connectivity and a vast material library to reveal the fat, protein, sugar and total energy content of food items with an excellent accuracy. Winning the Horizon Prize brought fame and glory – but on top of all that, it also brought almost 1M€ of money.

Spectral Engines is also launching an intelligent NIRONE Scanner Platform, combining all the areas in the victorious Food Scanner, but targeted to a different group commercially. Throughout its history, Spectral Engines has moved from components towards overall solutions, and with the building blocks now developed, final solutions to completely new scanner application areas are easier and faster to generate than ever. The applications can, for example, be something from the fields of smart industry, smart homes, smart agriculture or completely new portable devices for officials or the law enforcement. One of the strongest benefits for Spectral Engines’ customers is an extremely short time-to-market, enabled by the NIRONE Scanner platform.

The sum of four prodigies

The international success of the Finns is not a coincidence. Spectral Engines was not born in some momentarily, passionate innovation frenzy, but it is a fruit ripened in the moderate heat of professional development work of a couple decades. All the four founders of the company have an M.Sc. degree from electronics, and a long career in optical instrumentation research mainly from VTT Technical Research Centre of Finland. The founding of the company is a development story, where the researchers noticed a remarkable business potential in their work.

The current CEO Jarkko Antila was working in an international corporation in Åland, when Janne Suhonen contacted him in 2009 and asked if he might be interested in returning to VTT. Antila returned to VTT to be a team leader, and based on his experience, the team focused in optical sensors grew their customer’s sales revenue up to multiple million euros. As a result, a paradox occurred: the customers were genuinely interested in continuing the partnership, but because of its principles, VTT couldn’t bring the actual product to market. This dilemma woke an interest in the researchers on building their own company.

The belief in the success of the company was built on the expertise of the key players. Everyone was a prodigy in their own field. On top of this, Antila had seen on an industry level how 50 000 sensors could be manufactured and calibrated in a year. These factors contained the building blocks of success, done with hard work and a solid foundation. Finally, the company was founded in one simple phone call. “Are we going to start a company or what?”, Suhonen asked Antila. With the answer being yes, the matter was settled. The next step was to get seed funding.

The makers of a global future, from Finland

With the help of Tekes project funding, the commercialization project run by Antila and Suhonen got going during 2013. This is when the first prototypes, business plans and above all, first customer relations were created. During this stage Antila and Suhonen were still working for VTT, but the main funding for the projects came from Tekes. Their operations were already starting to look like a proper business, even though officially Spectral Engines started to function as one in 2014. The other founders selected through the commercialization project were Uula Kantojärvi and Jussi Mäkynen.

The founders of Spectral Engines had worked together for a long time, so the roles for everyone were naturally chosen: Antila is in charge of the big picture as the CEO, Suhonen has the lead in marketing, sales and business development, Mäkynen is in charge of electronics and system design and Kantojärvi takes care of technology development. The first employee, Matti Tammi, started as an application developer in the fall of 2014, and Joachim Mannhardt was recruited as a developer of applications and business in the important market area of Germany. After that, experts have been recruited when needed, and Spectral Engines employs already approximately 25 people, with a goal of recruiting around 10 people during the next 6-12 months.

Keeping the headquarters in Finland was a conscious choice. As globalization takes leaps forward and changes everyday life, location becomes irrelevant when it comes to business. Spectral Engines started in Espoo and they have an office in Oulu as well. At the moment, the headquarters is in Helsinki.

The start was a raging success: as soon as the doors opened and everything was set, Spectral Engines received an order for hundreds of sensors from a big international client. After that, the company has achieved milestone after milestone in product development, and has received international acknowledgement for its work. The biggest accomplishments are yet to come – in the eyes of the founders, the future looks bright. This is why the history of the company will be written in the perspective of the future.

Further proof on the applicability of the NIRONE Sensors in hydrocarbon gas measurements
2.07.2020

The study demonstrates the applicability of the NIRONE sensors to predict quality parameters in the food industry
25.06.2020