Industry 4.0 and how smart sensors make the difference

1st was when mechanization and steam power changed the whole concept of manufacturing.

It is easy to imagine how this evolvement changed the competitive landscape of many industrial processes.

It has been discussed already more than 5 years how IoT (Internet of Things) devices and sensors, digitalization, and big data can change the whole manufacturing industry in the next 5-10 years. It is no more a question of whether this will or won’t happen. The only remaining question is how fast this apparent evolution phase will be implemented into real actions in production.

Like a dear child, industry 4.0 has many names. Smart factory, cloud-based manufacturing (CBM), factory of the future, smart manufacturing, and digital manufacturing are all synonyms for this next big revolution. Even though using several names may create confusion, the scope of digitalization is clear: increase production efficiency, reduce waste, decrease manufacturing costs, but also gain new business. Industry 4.0 is a fascinating topic for almost everyone involved in the manufacturing industries because it combines multiple emerging technologies. This so-called 4th revolution requires a combination of talent and expertise. The road to success is paved with multidisciplinary competencies, and it will need more collaboration than ever in manufacturing industries. The industry 4.0 manufacturing concepts of the future should gain benefits from new sensing technologies, big data, cloud computing, artificial intelligence, adaptive robots, smart valves, and autonomous smart control applications for bringing maximum added value in smart processes of the next generation.

The goals and benefits of Industry 4.0

The benefits and driving factors of this evolution should be scrutinized as well. What is the value and payback time of the investments, and is this the proper time to jump aboard the moving train?

Of course, the first obvious goal for Industry 4.0 is to enhance productivity through automation. In addition, industry 4.0 will decrease waste and improve yield, which both are very important driving factors in all development. Smart factories will also increase sustainability through real-time monitoring of production, and the autonomous control systems will reduce the maintenance costs of future factories. Additionally, it can be seen that digitalization will increase the agility of production, which will, of course, give crucial competitive benefits for advanced manufacturing companies.

On top of all this, the industry 4.0 will change existing business relationships and value chains. In other words, agile companies can gain the benefits of this transition phase by bringing totally new products to the market for material sensing, data management, big data, or automation. The earning logics can also be totally different than in the past, for example, pay-per-results, monthly fees, or similar what we have already seen in the software industry (Software as a Service).

One of the largest studies on digitalization was published by PwC in 2016. Over 2,000 companies from 26 countries participated in PwC’s 2016 Global Industry 4.0 survey*. The conclusion from this survey was clear. Industry 4.0 is no longer a future trend, but it has already moved from talking to actions. For example, the study found out that only 33% of companies worldwide identified themselves as advanced in digitalization today. The number of advanced companies will be increased up to 72% in the next 5 years. So, this is clear evidence that the race towards digitalization is already on, and competitive landscapes will be redefined entirely in the nearby future. The same study claimed that 24% of companies believe to achieve more than 30% cost reductions in the next five years by investing into digitalization. The number was even higher in Asia, where 33% of the companies believed to get significant competitive benefits in manufacturing costs in the next 5 years. The majority of companies, 60%, said they would invest 2-10% of their revenue in digitalization, which is a staggeringly high proportion of their R&D investments. The investments are expected to be a total of US$ 907 bn annually until 2020. Another interesting finding in the survey was that though R&D investments were high, a majority of the companies expect Industry 4.0 investments to pay back within two years. 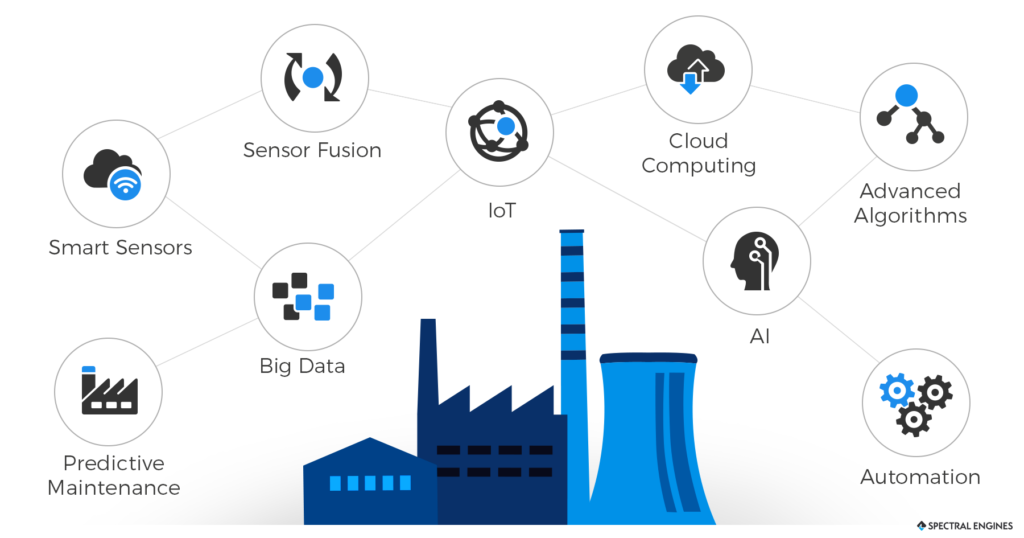 But how can we benefit from material sensing in future smart factories? Existing technologies exploited by measurement, control, and automation systems are mainly based on measuring physical parameters. Shape and distance measurements are critical for robots, flow measurement and temperature sensors are common in process control applications. The next big improvement will be deploying real-time chemical information from the measurement objects to an automation database and use it in automated control decisions. Spectroscopic technologies are well-established in off-line analysis in chemical laboratories. It is obvious that future smart factories will gain huge benefits when qualitative and quantitative material information can be generated with affordable and reliable sensors.

The price point of existing laboratory spectrometers is still several tens of thousands, and these systems are very rarely feasible to be used in real-time analysis of continuous processes. Spectral Engines has developed a new Scanner Platform, which can bring this material information from laboratories to future smart factories with a fraction of the price of existing material analyzers. The Spectral Engines’ motto has already been for several years to offer “Spectrometer performance at a sensor price point”. This shows how Spectral Engines sees its own role as an Industry 4.0 enabler.

Spectral Engines’ sensor platform is only one part of a complete sensing system. New expanded opportunities are related to machine learning, which brings the smartness to spectral sensors. We have most likely seen only the tip of the iceberg in how deep learning, cloud computing, and machine learning will be total game changers in many products and industries. Self-learning algorithms are going to play a very critical part, and cloud-connected sensors are a good example of what the IoT-connectivity can enable in the future. We are convinced that deep learning will generate so much information about future manufacturing processes, that the 4th manufacturing revolution will be a well-deserved definition for this giant leap of process industry. The change will be as dramatic as the one we saw when robots took their places at assembly lines.

A new era of process control

Real-time chemical sensors will open a new era of process control in several industries. The pulp and paper industry is a good example of how smart factory concepts have changed the production methods over the last decades, even before it was called Industry 4.0. Most likely, pharmaceutical and chemical industries are the next ones where the deployment of smart sensors can be seen more broadly.

Also, the industrial processes of food and beverages will benefit more and more in the future from the next generation smart sensor platforms. The future measurement opportunities are definitely related to moisture control, food ingredient measurements, ethanol concentration in alcoholic beverages, end-point analysis of pharmaceutical processes, and many more. The role of advanced machine learning algorithms will expand the opportunities to predictive maintenance, where the operator won’t need to know every specific concentration, but monitor the income and outcome flows in processes that may indicate some problems in the process tools. The list of opportunities is endless, and based on current knowledge, it is easy to say that the development will be faster than we can even imagine.

Digitalization will be the key driving factor of future factory concepts. Industry 4.0 is going to change the landscape of all production-based industries. It is obvious that there is a gap to be filled with smart sensors to generate real-time material information. By combining new affordable sensors and cloud-computing algorithms, many existing manufacturing problems can be solved. Based on the extensive PwC market survey, where 2000+ companies were interviewed, the majority of companies (72%) would like to achieve an advanced level in digitalization.

A lot of investments have to be spent, and the competitive landscape redefined in the next 5 years. The race is on, and we are happy to be a part of it and help you to create added value in your industry.

Further proof on the applicability of the NIRONE Sensors in hydrocarbon gas measurements
2.07.2020

The study demonstrates the applicability of the NIRONE sensors to predict quality parameters in the food industry
25.06.2020